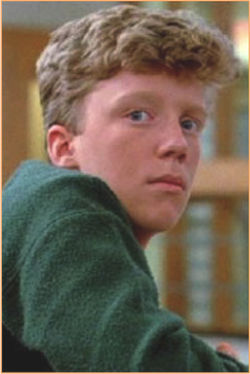 In the opening credits a voice over tells us that five stereotypes are going to spend Saturday detention together.

When we first meet the character, Brian, he is getting out of the car and his mother says, “Use the time to your advantage”. Brian responds with, “ We’re not supposed to study.” The mother replies, “You figure a way out to”. Immediately we link Brian to the stereotype of a ‘nerd’

Brian is dropped off, will spend almost 9 hours in detention at Shermer High School with four other ‘stereotypes’. Brian is a brain, academic and a classic nerd, who can be awkward sometimes. He always gets the best grades. He suffers from a complete lack of confidence in himself. The reason is he in detention is because he used the flare gun that was fired in his locker and tried to kill himself because he received his first "F" on a school shop class project. Immediately we learn he is under enormous pressure. Brian has almost 9 hours to write an essay. The essay questions is “why do you think you’re here at detention.” and “who do you think you are”.

As the film progresses, Brian develops and we learn he is more than a stereotype ‘nerd’. In the ‘Lunchtime’ scene, Allison and Andrew bringing the lunch from the cafeteria to the detention centre. The protagonist, John Bender asks, “what are we having for lunch?” Brian says, uh, it's your standard, regular lunch I guess...” I can see, John doesn’t like the healthy food and wants to eat junk food. Brian is always eating healthy food. Also he always follows the nutrients. We see he has a family who cares for him unlike Bender.

Further on, in the ‘virgin’ chat, Bender asks Brian, if he is a virgin or not. Brian is silence for a minute then he said no, Bender asks “who”. Brian said, “some girls on holiday”. Bender mocks Brian and before indicating Claire. Eventually, Brian ‘fesses’ up to being a virgin and we see a certain strength in him. Claire tells him it is ‘cool’ to be a virgin.

A crucial scene that shows Bender develop is when Bender and Claire go to the other room to have a smoke of ‘weed’. Brian wants to join them, as he wants to try to be cool as them. Andrew isn’t joining them because he is a sportsman and is on currently scholarship and he won’t smoke. Allison Reynolds “The basket case” is also not joining in. Brian’s personality is “trying to be cool” and his behavior changes into a drug induced happy clown. Brian the ‘nerd’ has seriously broken the rules and having a great time. The guy who tried to kill himself is nowhere to be seen.