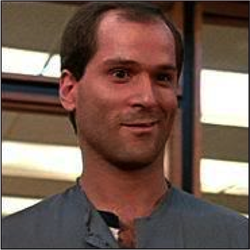 In the breakfast club Carl is a janitor who interacts with the students and principle of the morning detention. Though his role in the film isn’t all that big he still has a significant impact on Vernon (the principle).

Carls relationship with each of the other characters is unclear as, in the beginning, he seems to know Brian some how but it isn’t established where from or why.

At the start of the film we see a picture of Carl Reed in a ‘man of the year’ of 1969 photo. This could mean, though Carl had been at the top of the school at one point, something had happened to have him kick down to becoming a janitor. Is shows that being popular in school doesn't mean success in life and may even result in the opposite.

Carl is first seen in the library where the kids are taking their detention. He knows Brian well enough for Bender to think that he was his father. Though his comment “I didn't know your father worked here” might have been an insult.

Further on in the scene Bender tries to tease Carl about his position and he reveals that he knows all about the students, that he listens to their conversations, look through their mail and lockers. “I am the eyes and ears of this institution”.

When Carl find Vernon looking through the confidential files he black mails Vernon into giving him fifty bucks and then later is in a scene with him drinking.

In the scene when Vernon and Carl are drinking in the basement Carl sees right through him. He understands that Vernon only took the job because he thought it would be fun and that there would be time off.

Carl wears a typical janitor outfit, a light blue top with a pair of light blue pants. He ears a glove on his right hand and is seen with his mop and bucket for most of his screen time. Even though his whole outfit reflects a low, “peasant” like position in the school he has a sassy and confident attitude.