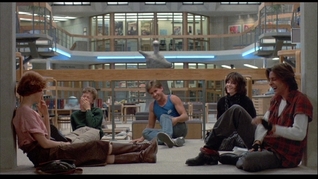 When the film starts it introduces a voice over of Brian, one of the children in detention. He explains theirs situation and the idea that they were brainwashed into seeing each other and them selves as sub-cultures and stereotypes. The film switches between shots of the school that has significants and that explains why some of characters are in detention during. The voice over explains how they thought of each other when they first entered the school for detention.

After the voicer over finishes we are introduced to the main characters, their relationship with their parents and the stereotypes that they represent. The next scene introduces a new character Vernon, the principle. Benders stereotype represents the criminal/rebel, there is an instant rivalry between Bender and him.

Through out the movie Bender constantly tries to wind people up, rebel against Vernon and show off, constantly reminding us of his characters stereotype. When Vernon leaves, some of the character’s stereotypes are revealed with more depth. The athlete (Andrew) tries to push against Bender, Bender constantly creates trouble and Brian talks about his academic clubs.

In summary of the beginning part of this movie, it introduces all of the different sub-cultures of a typical school, a criminal, a princess, a brain, a basket case and an athlete. This situation causes a lot of conflicts and ideas by putting all of these stereotypes together and seeing how they would react. Though Bender teases them all, they all seem to have a moment when he makes them laugh. The beginning voice over high lights how they all see them selves and each other in their most convenient definitions (athlete, criminal, princess, ect) but that they were brain washed into doing so. Over the entire movie it highlights the stereotypes and sub-cultures that school kids are categorised into and how each of them deal with each other.

During the last half hour of the film the characters really start to connect with each other. When Andrew, Allison and Brian are sitting down, Allison begins to describe what her life is like at home. She tells them that her parents just ignore and don't care about her. She talks about running away from home but Brian and Andrew are a little bit confused and does not understand were Allison is coming from with this problem. We can see that she is quite offended and upset about this and tells them to forget about it. When Andrew tries to repair the situation she gets frustrated and decides to leave. Andrew goes up to talk to Allison and tries to repair the situation with her. Allison finally lets out and talks about her home life with Andrew. He then understands it and can relate to her situation.

We are then taken back to a conversation that the Janitor (Carl) and Principal Vernon are having in the basement. Vernon talks about how every year the students are becoming more arrogant but Carl believes that Vernon is just becoming older and more frustrated. He interrogates Vernon into the responsibilities that he has but did not think about.

We are now taken back to a shot of all the students sitting down in the library. They are discussing private information about each other’s lives. Clare and Andrew are scared to talk about not having lost their virginity and we find out the different reasons they were in there. We also find out the many different similarities that all of the students have to each other like family and stress related problems. The group is also faced with a hard question which is will they stay friends once they get out of detention. There is a big argument about this and never really does get resolved. We seem to find out that even the popular Claire and Andrew have problems of there own like for instance Andrew cannot think for himself and will pretty much do anything his friends tell him to do. We also realise that many of the students are in there for pretty bad reasons for instance Brian tried to kill himself. The group really start to realise what different problems other members of the group have to face and how hard their life actually is. After they all get over their differences they let loose and start dancing in the library with some crazy dance moves.

After we see that they still need to write their essay but Brian decides to write the essay regarding all of them.

Claire takes Allison into another room and decides to give her a full makeover. We find out that there is another side to Allison that we haven’t seen and Andrew really begins to like the new Allison.

Brian has finally finished the essay and instead of writing on what he was supposed to be writing about he wrote about ‘The Breakfast Club’ and what they have become. "Dear Mr. Vernon:
We accept the fact that we had to sacrifice a whole Saturday in detention for whatever it was we did wrong, but we think you're crazy to make us write an essay telling you who we think we are. You see us as you want to see us... In the simplest terms and the most convenient definitions. But what we found out is that each one of us is a brain... ...and an athlete... ...and a basket case... ...a princess... ...and a criminal. Does that answer your question? Sincerely yours, the Breakfast Club.”

At the end of the movie we see that Claire and John have sorted out their differences and decide to make peace rather then fight with each other. Allison and Andrew also get together in the ending. We see Vernon writing the essay that Brian had wrote regarding the breakfast club. The last scene ended with a voice over of Brian reading the essay and John walking across the oval and raising his left hand.