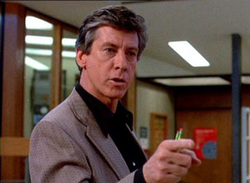 In the film ‘The Breakfast Club’ one of the main characters was the Principal Richard Vernon. Principal Vernon appears to be an older man (late 40’s-50’s) with brown greyish hair. In the film Vernon wears an out of date 80’s style leisure suit. We can see that his clothes are out of style because of John Bender’s reaction. When you first see Vernon at first he looks like your average stereotypical principal. He has blonde/ greyish hair.

Some character traits that we can see is that vendor is very strict some may even say always angry due to him always pointing his finger and being very firm with the students. In the film Vendor is always yelling at the students and we can tell he probably does not want to be at school minding detention on a Saturday.

Principal Vernon does not really understand the teenage generation and how they live their life so he decides to ignore it rather than educate himself and puts them into a group. Principal Vernon especially hates Bender because of his refusal to listen, attitude and disrespect for him. He does not trust these kids and feels like they’re all useless. Principal Vernon is also dishonest by looking at children’s confidential files for his own personal gain.

Principal Vernon does not have a massive role in the movie but we can still see that he does have power over the students even though they refuse it.

Vernon did not really care about the students and made them sit in a room for 8 hours so that he could just forget about them and not have to worry about it. When they refused to listen Principal Vernon got very cross and acted out.  We can see that this is almost a detention for Vernon and that he is having a bad day so that is why he is acting out.

Principal Vernon has anger for these children and his authority. He knows himself that he may be able to control their kids at school but he has no authority out of school.

Richard Vernon was quite narcissist and cocky. We can tell this by how he would always gloat about his power and for instance when he went up to the fire extinguisher and looked at himself and gave himself compliments in this head.

When Vernon has the talk with Bender we can really feel some extreme hatred and sympathy for the two characters. At first we get the impression that it is just a typical bad kid principal talk but we do feel some sympathy for both of them during the talk because we do see that both Vendor and Bendor both may have a lot of different problems in their lives.

Overall Principal Vernon comes across as an angry stereotypical principal. He dislikes the students and does not want to be liable of the responsibilities that he has as a teacher and role model for these students